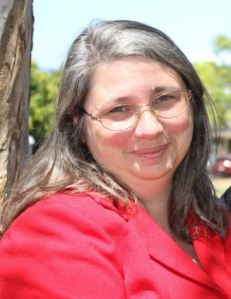 The wildest thing I’ve ever done was grow up in the seventies.

In a story eerily similar to Clark Kent’s, I come from far far away, but I’ve lived in the same leafy shire for the last forty-something years. To preserve the secret of my true identity, as a writer of tender and articulate regency romances, I hold down a day job teaching English at a local high school. I am generally considered to be a useful source of irrelevant trivia and obscure words.My superpowers are too many to enumerate, but I can leap massive piles of marking in a single bound, see through teenage obfuscation with my X-ray vision and burn the candle at both ends with my heat ray.

I’ve written and invented stories for my own amusement for a long while. In 2014 I went out on a limb and published An Affair of Honour. Little did I know it, but I had opened the lid on a can of awesome and there’s no putting it back on.

Melanie Page is an author of historical regency romances. Her first novel, An Affair of Honour was released in 2014, with Sweet Revenge and A Twist of Fate both released in 2016.

Melanie’s love of regency and Gothic romance stems from an adolescence immersed in Victoria Holt, and an adult obsession with such incredible authors as Jane Austen, Charlotte Bronte and Georgette Heyer.

These days she finds herself too caught up in the lives of her characters to read much, but she still loves to sit down with the works of Anne Gracie, Mary Jo Putney and Stephanie Laurens.

You can find Melanie on her Author Facebook page.