To our fallen men and women. Lest We Forget.

Sophie’s gaze ran up and down the long bronze list bolted onto the memorial.  Her eyes blurred as she blinked back the tears. The soldiers forever immortalized, never to grow old:

The names on the plaque stared back at her with a cold, hard accusation.

“I should have brought you home,” she whispered to their shadows. 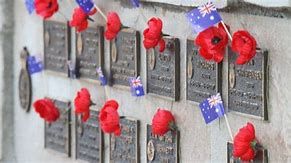 Retired, Royal Australian Navy Pilot, Lieutenant Sophie Murray, swallowed back the pain. It hurt to stand, but she refused to sit. It hurt to be out here where all and sundry could stare at the melted skin which was her face, but she’d not let those boys down a second time.

It was an unusually balmy April morning out at Beachmere ANZAC memorial. The small sea side town where three of the diggers from the 4th Battalion, who were…