Heidi Wessman Kneale is an Australian Fantasy Romance author best known for her escapist fiction. When not indulging in her love of Romance, she’s an ambidextrous polymath by day and conceptual astronomer by night, (as that’s the best time to be an astronomer). 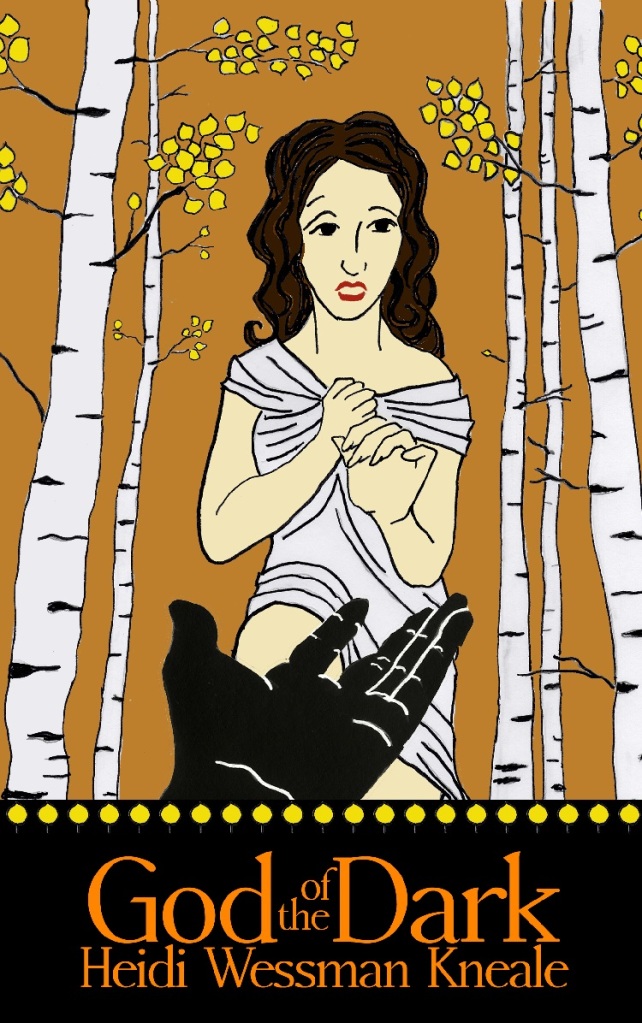 Q.  Where did the idea for your book come from?

God of the Dark came together a long, long time ago when I got sick of certain tropes in Fantasy. There were too many tales of the farmboy, or the Everyman, who set off on great adventures. What happened if the country lass didn’t want adventure? What if she was quite content to remain where she was in her country life?

Q. Why do you write romance?

Two reasons: its feminist leanings and the HEA. I love how the heroines in Romance know what they want and will do what it takes to get it, but they are not ridiculed or shamed for wanting what they want. And in the end, not only do they get it but are supported in their triumph. While much of the world may look upon Romance as mindless fluff, I find it rather empowering.  I love HEAs because of their optimistic nature. It’s as if they reassure us that good and love and joyful things can triumph in the world.

Q.  Is there anything which sets it apart from any other book in the genre?

There have been a few people who insist God of the Dark can’t be classified as a Romance, because it lacks the HEA (this comes in Book 3). But as the whole plot is about Mor-Lath’s courtship of Adrastea, how could it be considered anything but a Romance?
Also, my readers benefit because all three books are coming out so close to each other. Many traditionally published series make readers wait a year (!) between books, and even many indie authors have a few months between releases. With OF THE DARK by the time you’ve finished with one book, the next one is out.

Q. What, if any, were the challenges you faced writing your book?

Originally, the series was going to come out about six or seven years ago. As I was finalising the drafts, I had several friends undergo a few dire events in their lives, events that were too close to certain events that happen in Book 2. Since I didn’t have enough spoons to work on the series and support my friends, I chose to support my friends. The books would have to wait. Now that my friends are in different places in their lives, I was able to go back and finish this work without it taking too much away from my own stability.

Q. Tell us about your process, how do you get into a writing mindset?

I’ve been writing for decades. I don’t have any rituals, or music, or beverages I need before I can write. All I need to do to get into a writing mindset is to sit down at the computer and tell myself to write. Some writers are held back because they feel (often subconsciously) that they are only allowed to write down words if they’re the correct ones. I’ve given myself permission to write any word that comes to mind, because if it turns out to be the wrong one, I can edit it out later.  Bad words can be edited. A blank page cannot.

So, I sit and start writing. If I find I’m stuck for any words, I’ll start freewriting about how I’m stuck and why, and nutter it out. That’s pretty good for getting me flowing again.
I don’t get stuck too often because I’m a plotter. I’ll spend plenty of time pre-writing the plot and scenes. Only after I’ve worked out the general outline, will I nubble down the plot, laying down the outline in yWriter. (I prefer yWriter as my novel drafting software. It’s very similar to Scrivener but without the steep learning curve.)  Once I’ve got the plot down, I outline my scenes. Only then do I settle down to do the actual writing. By this time, I’ve pretty much drafted the whole book in my head, and it’s a case of scribing the words.

Q. What is the underlying theme of your book, if any?

The choices we make and their impact on others – mindfulness is important.

God of the Dark

Adrastea, a simple country healer, is surprised to receive a marriage proposal from the Dark God Mor-Lath. As a devotee of a rival god, naturally she turns him down. She was raised on chilling tales of this chthonic being who drags the souls of the unrepentant to Dom-al-gol.  Adrastea loves her simple country life of brewing medicines and saving lives. Marriage to Mor-Lath would greatly complicate things. Besides, why would the Dark God propose to her?

Undaunted by her refusal, Mor-Lath insists on courting her. Sometimes he is charming, winning over the other villagers, but other times, she sees him for the dark god he truly is. He refuses to let anyone stand in his way. While he makes it clear he’ll only have her willingly, he’s making it very difficult for her to say no. She wonders, what is he really after?

Adrastea faces a quandary: if she accepts the Dark God’s marriage proposal, she’ll lose her very soul. But if she rejects it, the world itself and everything in it might be at stake. Either way, the price is too high.

I don’t know if I could call either Mor-Lath or Adrastea typical. Adrastea is very much a reluctant bride. She’s wary of this Dark God and the things he offers. She’s not looking to get married and thinks not so much of herself, but the impact her choices have on those around her—her family and the village.
Mor-Lath is, well, a god, with the ability to change the universe to suit his whims. That doesn’t mean he’s not subject to the laws of the universe. To win Adrastea’s hand isn’t as simple as commanding her to love him. For spoilery reasons, she’s got to come to the marriage willingly.

Q. What was your inspiration for your MC?

Greek Mythology.  While some people look at Mor-Lath and Adrastea’s story as a possible Persephone retelling, it’s so much more than that. I borrowed elements from various myths, such as Jupiter and Juno, to construct the importance of the complex relationships about us. But what I love about how I used these myths is that my storyline doesn’t look like any particular myth dressed up in different clothes. The storyline stands for itself, with occasional elements of mythology colouring the themes.

Q. What kind of research did you undertake when writing?

Greek mythology and American history (of all things).  Elements of my worldbuilding come from the stories of settling the American West, though there’s not a western vibe about the book. I used the themes from Greek mythology for the structure of my own themes, and the American West for my worldbuilding. You’ve got your Smalltown America in the country villages, a small, yet feisty nation who rejects the notion of kings, nomadic tribes who completely failed to be oppressed and an old world whose given in to the weight of their own hubris.

Q. What was your favourite part in writing this book?

Getting the uberplot settled across all three books. Not every author gets the luxury of being able to go back and adjust things in Book 1 because of things that happen (or need to happen) in Book 3. I got a wicked little delight over dropping very subtle clues early on that only makes sense until the end of the trilogy. I was only able to do this because the release schedule.

Q. Besides the gorgeous cover, what about this story will draw your reader into your world?

Because I played so much with theme, I’m hoping the readers will find something that sings to their souls. I want them to be able to find something in the various relationships that they can draw parallels in their own lives. Do they have an imperfect mentor? Do they have a parent they love in spite of that parent’s flaws? Do they have to make heavy choices that affect not only themselves, but those around them? Do they have to keep secrets to protect others? Do they yearn for their own dreams and goals, yet have to struggle with Real Life interfering with those dreams?

Q. Where to buy your book?

Excerpt from God of the Dark

She drew a shuddery breath. “Who’s there?”

A man came out from behind the trees, moving silkily towards her. She squinted. He looked familiar.

He wore black, from the fine shirt laced across his chest to his well-fitting pants and high-topped boots. Nobody in Sacred Spring dressed like that. A black cloak draped his shoulders, the hood thrown back. His hair was also dark, tendrils brushing the edges of his face. His skin was pale, his features fine. His eyes startled her the most, for they were lighter than they should have been, possibly green. Those eyes bore into her soul.

The Lines of Creation flickered about him, stronger than she had ever seen, even in the cellar. They created an aura about him so strong the trees themselves seemed to bend under the weight of it. That same aura reached out to her. Adrastea retreated into the water, her feet slipping on the stones. The Lines wrapped about her and drew her back.

“Adrastea.” His voice was a rich baritone that woke a dormant hunger in her.

Her heart hammered in her chest. Why was he so familiar? “I know you,” though she didn’t know how. The Lines around her reached out to him, linking them. They wanted to pull her to him.

He held out his hand. “I am Mor-Lath, God of the Dark. I have come to claim you, Adrastea, as my Bride.”

If you would like to connect with Heidi you can find her on:
Blog: http://romancespinners.blogspot.com
Twitter: @heidikneale
Goodreads:  https://www.goodreads.com/author/show/2899577.Heidi_Wessman_Kneale
Webpage: http://tinyurl.com/heidikneale

Thank You Heidi for taking the time to chat to us about your writing and your book!